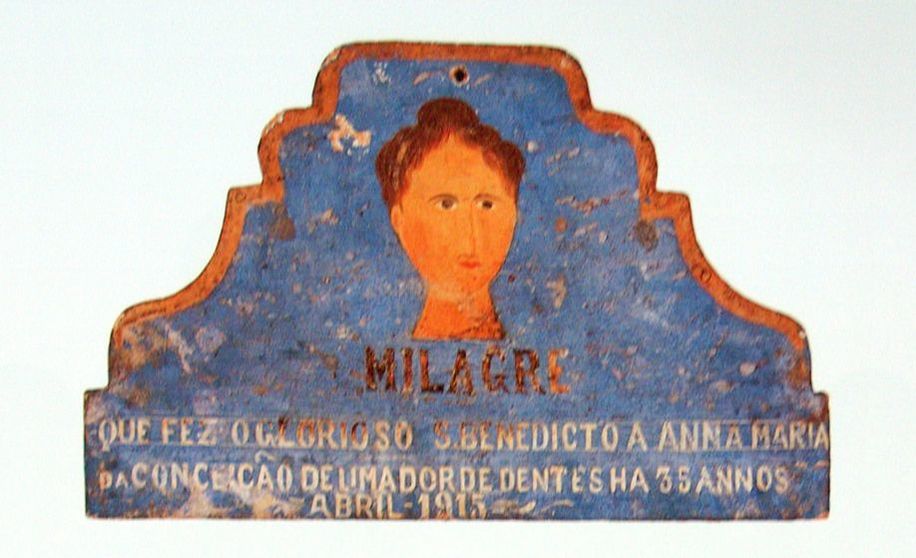 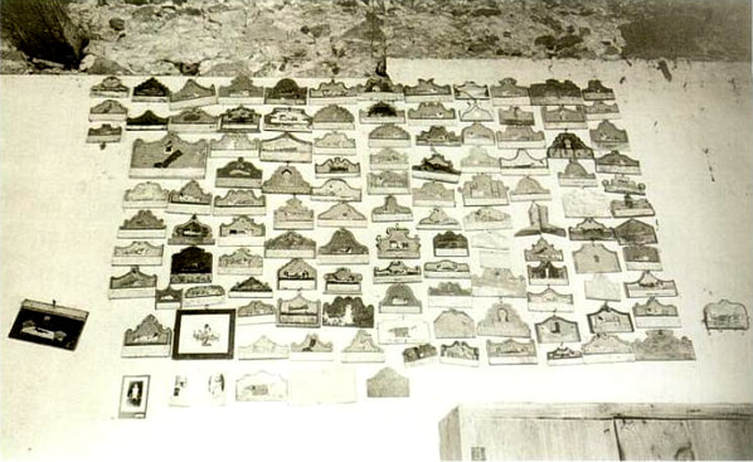 In 2013, in Salvador (Bahia state - Brazil), I started the thank you project. In it, I offer my handmade images service for people to thank for something they lived. Brought to Brazil by the Portuguese catholic colonizers, the Miracle Drawers (Riscadores de Milagres) were the painters that near the sanctuaries made paintings for the people to thank for the graces they received. An ex-voto is an object you offer to fulfil a promise you made. Sometimes it was the devotee herself that painted the ex-voto. Nowadays, in the many sanctuaries that have crowded ex-votos rooms, photography totally replaces painting. It is there side by side with thousands of other votive objects and messages. As far as I am aware, only in certain places of Central America are ex-votos paintings still made. 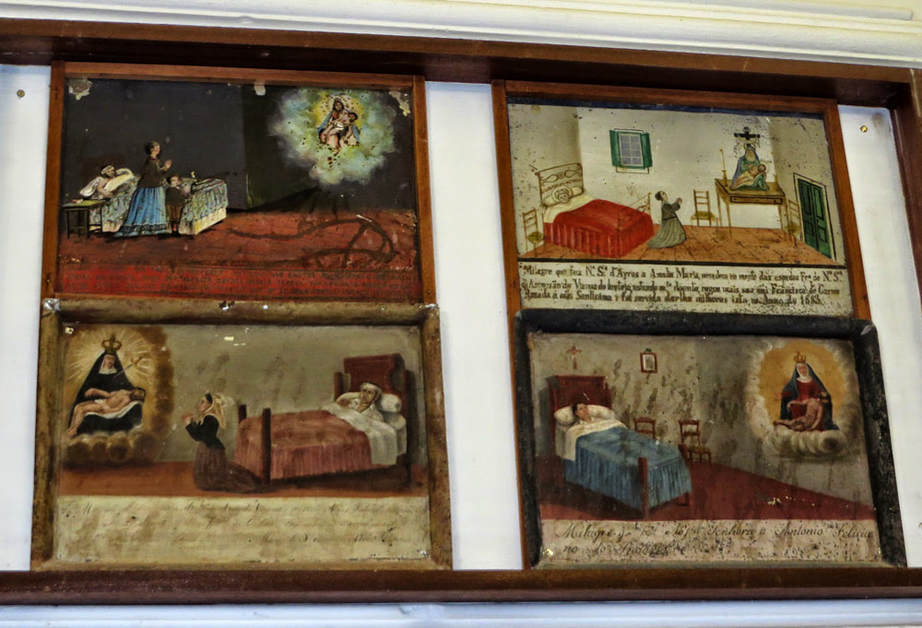 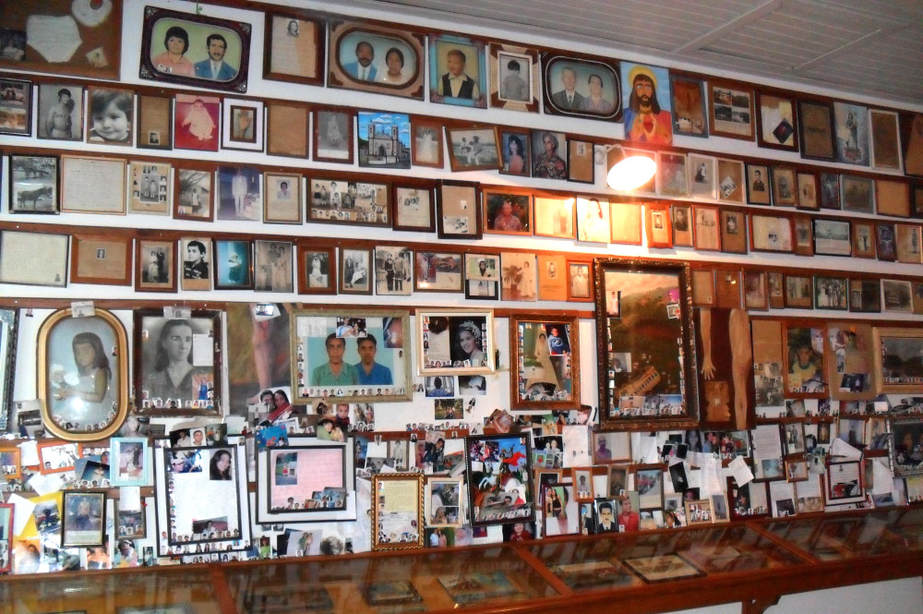 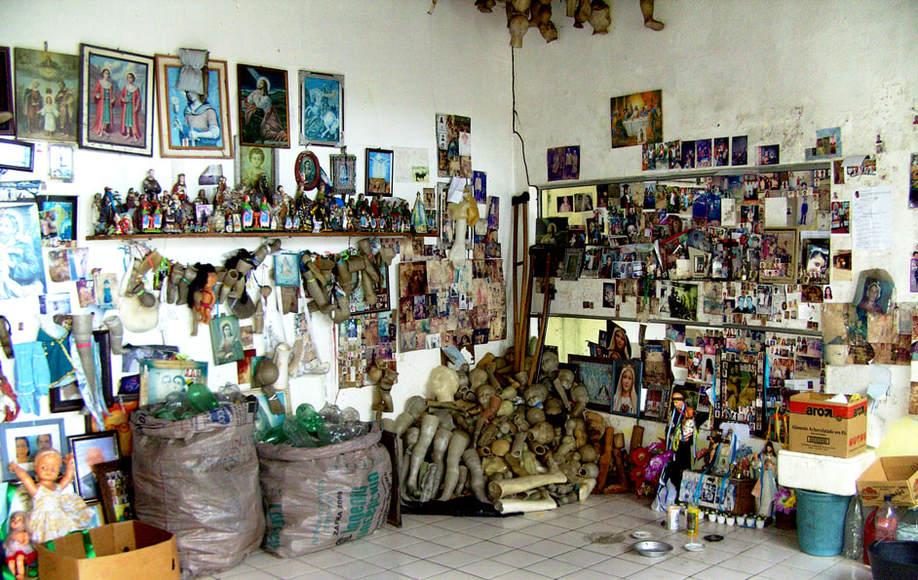 This project aims to move away from the strictly catholic and miraculous realm to access an eventually more open potential that is held by this almost extinct tradition of thanking through handmade images. Paradoxically, not being able to captivate spontaneous participants in the crowded and competitive streets of central Salvador, it was near to Senhor do Bonfim’s church that I was able to get my first clients. This sanctuary is a landmark for several faiths, not only for the Catholic church. And even there, and contrary to the preconceived notion I had before going to Bahia, it was necessary to go and meet people that were passing close by and actively try to persuade them of the project’s interest. Only sometimes was I successful. The rest of the participants were people that I met in the artistic milieu. 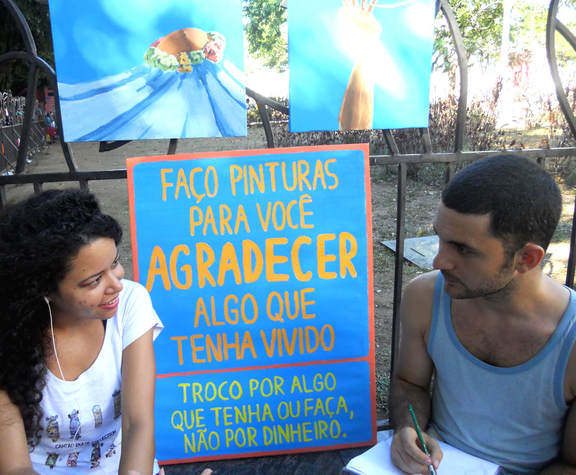 the only participant in the day that I went out to Largo São Salvador.
She came because of the advertisement within the local artistic scene. 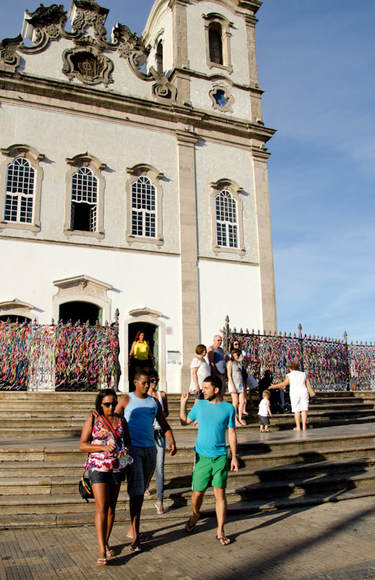 Trying to find participants in front of the Senhor do Bonfim church.
The coloured wrist bracelets that hang from the fence are a widely recognized symbol of the sanctuary that is used throughout Brazil.

From the conversation I had with the person, I made a sketch for the image. This sketch was then reviewed and adjusted according to her feedback, and a time and means of delivery was settled, was well as what was to be given in exchange. The painting was made later at home. To define a transaction in which the presence of economical privilege is minimal, the painting was paid by direct exchange with something the person had or did. This sort of exchange is called “escambo” in Brazil. 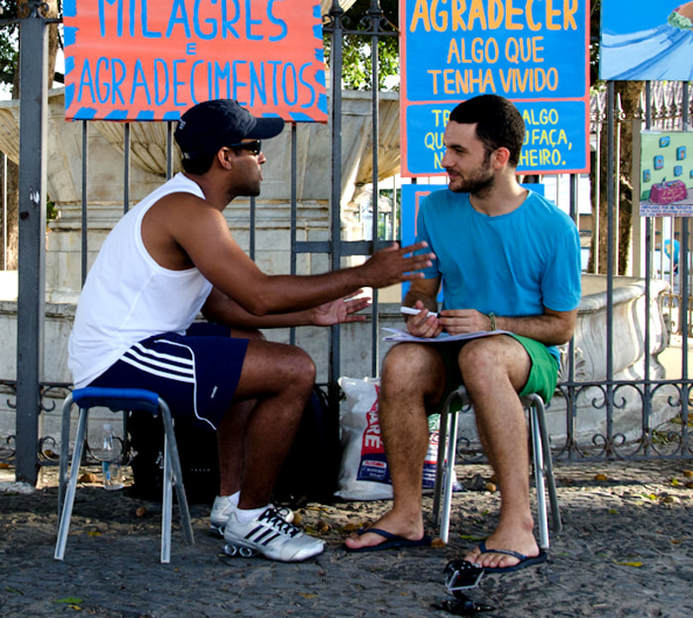 participant that was visiting the Sanctuary. I exchanged the image for the sending of flower seeds from his native region 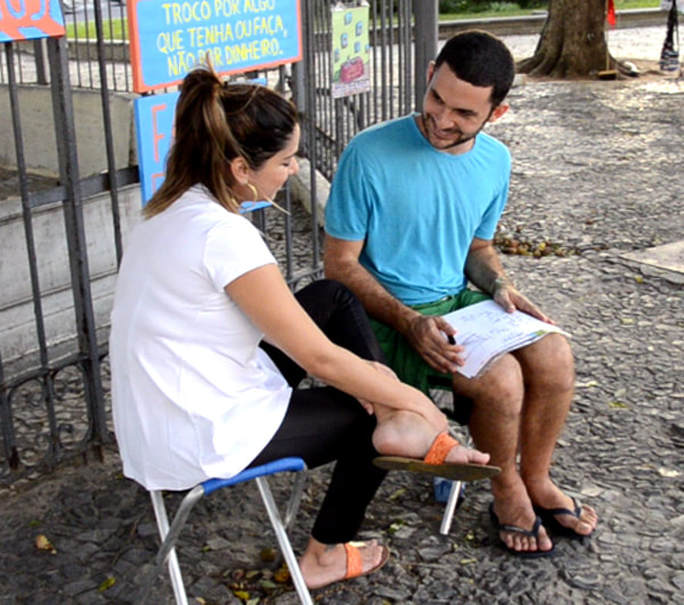 participant that is part of the local artistic scene. the exchange never got to happen 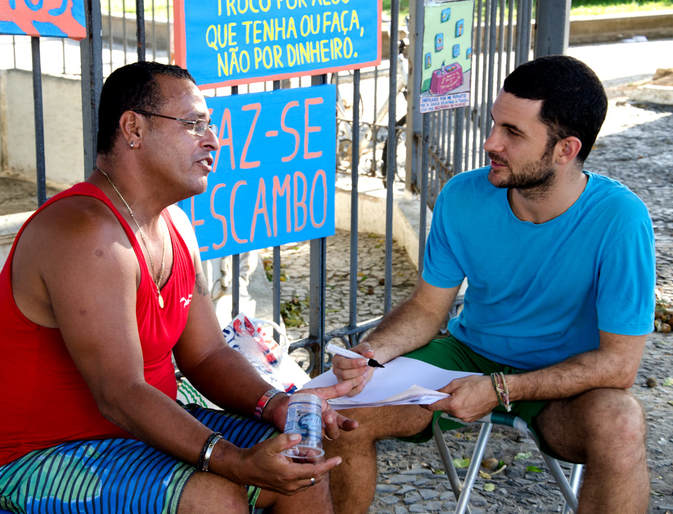 participant that works as street seller by the Sanctuary. I exchanged the image for a prayer at the Sanctuary.
Contrary to what I wrote in the ex-voto done by myself to thank for the opportunity I had to go to Bahia and start this project, today I see that I did not reactivate the Miracle Drawers tradition. How could such a thing be done by a white middle class European that only spent a few months in Brazil and that, in any case, has mostly worked within the closed realm of contemporary art? What was eventually activated was some comprehension of the social, economical and spiritual dimensions that surround the ex-votos phenomena. Notwithstanding the fact that for practical reasons I am also present within the parameters of contemporary art, what was reactivated was the determination to follow an image making practice that is consciously committed to the affective and deepening dimensions of people and that does in such a way as to erode as much as possible the economical, cultural and class privileges that operate within the economy of the images for people projects. 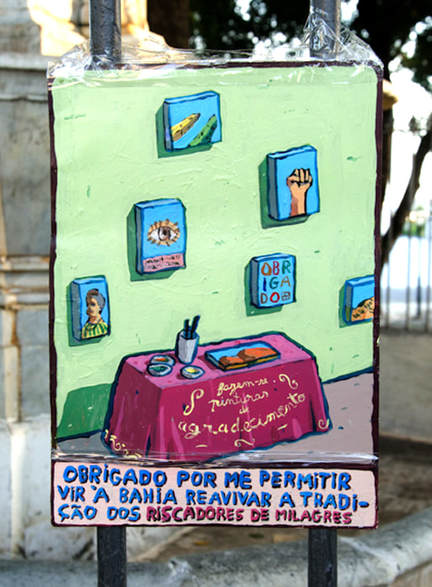 my own ex-voto, that was always with me when I wet out to the streets with the project.
I reads: "Thank for allowing me to come to Bahia and reactivate the Miracle Drawers tradition."
I then opted not to place my own ex-voto in the Sanctuary. It came back with me to Portugal and I ended up having to sell it for financial reasons. But I thank it all and the project goes on.

All the descriptions I present are summaries I did of the person’s words and of the interaction I had with her. 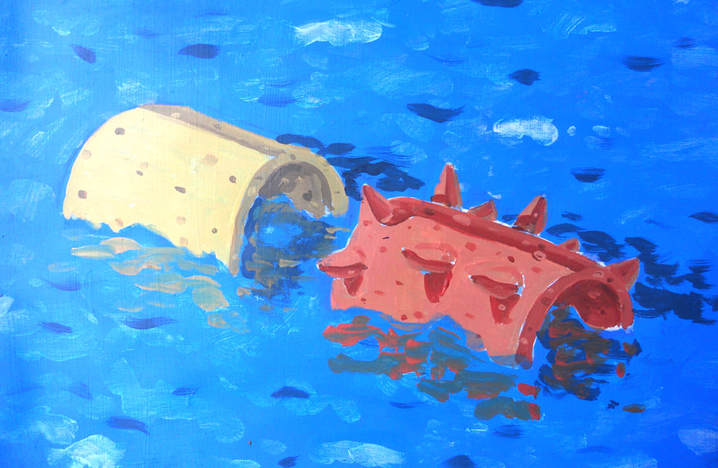 Thanks giving for having met and been together with a person who has already died. They spent a lot of time together in two public concrete benches that stand next to each other. Their relationship was marked by a significant moment they lived by the sea. Since that time, the project participant keeps the habit of wearing a wrist bracelet. The other person also wore one, but his had metal spikes. 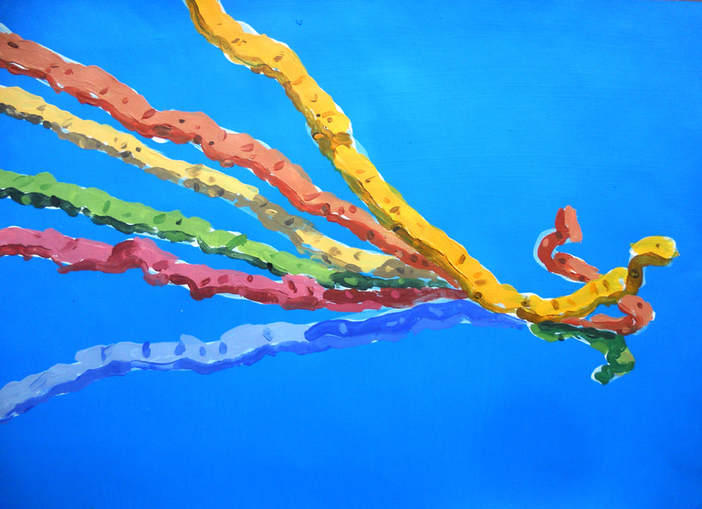 Thanks giving for a moment in life were many good things culminated in a child being born.
Right now there are a few important decisions to be made. Namely in professional terms, there are some distinct possible paths. 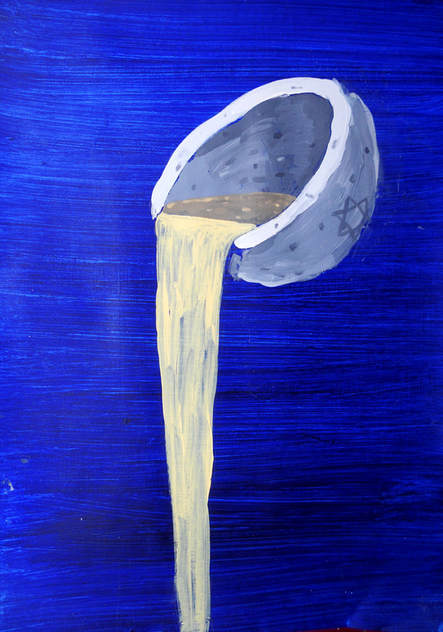 Thanks giving for a healing occurred during an ayahuasca ritual. The person who guided him in that session wore a tiara showing the David star. During that night-time session, an entity poured a luminous liquid into the person’s mouth. That was a key moment in his life, has he had been addicted to a heavy substance for the previous 6 months. 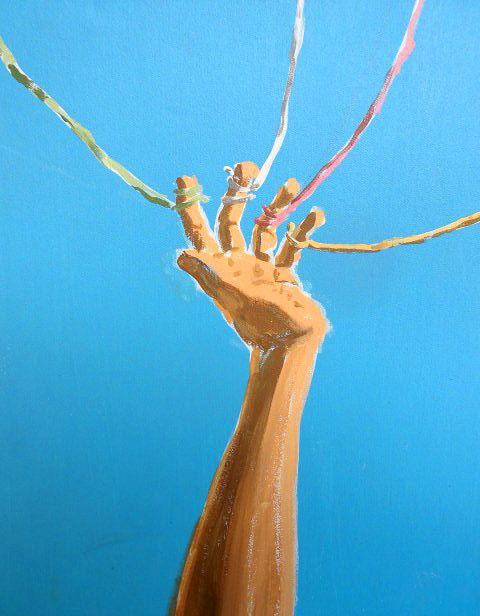